The City of Islands

Stockholm is a city of islands, built on 14 islands of differing sizes. Beyond those, the archipelago stretches across almost 30,000 (yes, thousand) islands for around 60 km out to the Baltic Sea.

If island hopping sounds like the quickest route to seasickness, don’t worry; it’s easy to get around Stockholm’s 14 islands. Thanks to 57 bridges across the city, a boat isn’t even necessary.

A short hop, skip and jump from Stockholm’s Central Station is the island of Kungsholmen. And one of the first buildings that meets your eye is the magnificent Stadshuset (city hall).

A tour of the interior is time well spent. The Blue Hall plays host to the Nobel banquet on 10 December every year, while the walls of the Golden Hall upstairs are adorned with stunning mosaics.

A wander through the courtyard of this 1920s building takes you to the waters of Lake Mälaren, where you can stroll along the pavement, admiring the moored boats.

In the summer, Mälarpaviljongen is a charming place to stop and quench your thirst, if you can find a spot at this popular floating café.

Spanning the lake is Västerbron, which will take you to Södermalm. As you cross, you’ll see a further two islands to your right: Långholmen and Reimersholme. Långholmen was the site of a prison for around 100 years until the mid-1970s. It is now a hotel where you can spend the night in a converted cell.

Once on Södermalm, head along Hornsgatan to get a flavour of the area’s vintage stores, cafes and bars. But don’t get too distracted, because you’ll need to get your camera out for some of the best views of the city next. 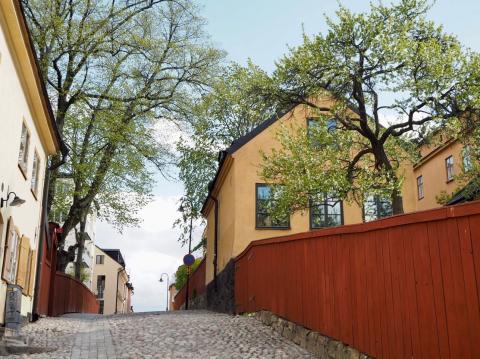 The Monteliusvägen pathway high up along the waterfront passes old wooden houses to one side and offers views across Gamla Stan, Kungsholmen and the rest of the city to the other. It is particularly beautiful at sunrise and sunset.

Once over the lock at Slussen, where the waters of Lake Mälaren meet those of the Baltic Sea, you pass into the medieval heart of Stockholm: Gamla Stan. Although it is packed with tourists every day, there are ways to evade the crowds. Instead of taking the main street (Västerlånggatan), wander through the gränder (alleys) and narrow streets.

Cafe Under Kastanjen, located in the shelter of an old   chestnut tree, is a sweet spot, or splash out in 18th century  style with meatballs at Gamla Stan institution Den Gyldene Frede. 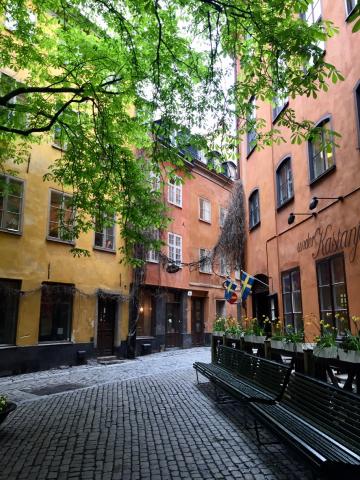 Once sated, the next island calls. The small Riddarholmen is home to Riddarholmskyrkan and its distinctive cast iron spire, along with a handful of palaces and government buildings.

The seat of power in Sweden – the Riksdag, or parliament – is located on its own island, called Helgeandsholmen, which is also home to the Museum of  Medieval Stockholm.

Back on the mainland, skirt the waterfront past the Royal Swedish Opera, the magnificent Grand Hotel and the newly renovated National Museum to the next island. Skeppsholmen was originally home to military buildings but now houses the Museum of Far Eastern Antiquities, the Museum of Modern Art and the Swedish Centre for Architecture & Design. If you are visiting in December, be sure to pop in to the latter to see the many schools’ entries to the annual gingerbread house competition.

From there, it’s a very short walk to Kastellholmen, where the hill offers stunning views across the island of Djurgården.

Djurgården, for All the Activities 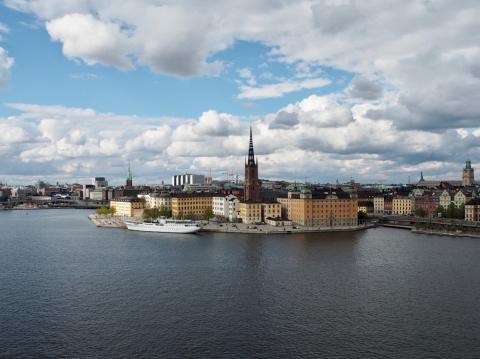 A 5-minute boat ride can speed you directly over to Djurgården. Landlubbers can walk back across Skeppsholmen, onto the mainland and enjoy the imposing buildings along Strandvägen – some of the city’s most expensive real estate.

Djurgården is where you’ll find amusement park Gröna Lund, children’s museum Junibacken (based on the books of Astrid Lindgren), the ABBA Museum and the Nordic Museum, among others. A little something to keep everyone entertained. One of the highlights on the island is open air museum Skansen, a collection of historic buildings rescued from all over the country. 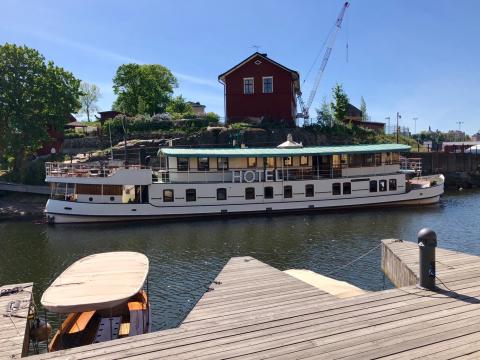 The final island is little Beckholmen, where the city’s   boats were pitched with tar for waterproofing. In fine   weather, the terrace at Oaxen Slip offers lovely views of   this small island.

And that is how to see 12 different islands in one afternoon!